Top Posts!
Foreword
Eight months later - how time flies!
One hell of a ride and back
Home alone
You're not alone, speak up!
My baby is 4 month old today!
The Baby Whisperer
Zeit für die Selbstreflektion
Tag:

It is Sunday, 2pm. I’m in Zurich, my home city and am visiting my family and friends, and I have a bit of work to do too. Meetings, events etc. I’m lying in bed – a bit of “Netflix and Chill“, while my Mum is looking after Amélie. She wanted to give me a couple of hours TO MYSELF. Thank God for Mums, right? (When I think about this sentence, I feel the urge to become philosophical…but I will leave that for now. Thank me later.)

I hear the following noises from the living room: “Wuuuuuuuuhhh” and then a laugh and then again a “Wuuuuhhh” and again a laugh. Amélie loves communicating with us, unbelievable. She is very active and alert, and such an enchanting “Happy Baby”. She giggles away, and often even laughs out loud. She looks you straight in the eye and then starts making noises, probably because I have the strangest facial expression when I look at her from above. I mean…the perspective she has of us parents can’t be exactly flattering, right?

Greg, my husband and Amélie’s Dada, is not part of the trip this time. He is in Ireland at a stag/bachelor party, and the following week abroad on business. It is the very first time that we are separated as a family for such a long time. Strange feeling…I flew alone with Amélie for the first time, and do almost EVERYTHING alone. And somehow I only now know what “doing EVERYTHING alone” means. Put her to bed, breastfeed, change diapers/nappies, play, entertain, animate, read to her, cuddle… but also check if there are any clean diapers left, buy equipment, groceries, and so on. A lot of what my husband usually does, but I never notice because it’s just always there: in stock. At this point I have to officially admit that I didn’t know how much my husband actually does in the household, in addition to his job, in the evening when he comes home at 7pm. „Thank you, me luff – I’m sorry that sometimes I’m a pain in the bum and am complaining because I’m tired or stressed.“ This week I noticed how lucky I am to have such a partner, and learned to appreciate him once again from another side. Funny, sometimes you have to be separated to realise how tightly you are connected to each other.

But I am also alone with the worries in the night…wow! Couldn’t someone have told me in advance that, from now until eternity, I would ALWAYS be worried over Amélie? I mean, it is crazy! I sometimes get up in the middle of the night, she’s sleeping… and run over to her baby bed and listen or gently touch her chest to see if she’s still breathing (!!!) because she’s so quiet! Oh gosh, please don’t judge. But I also wake up every time she moves a little louder, coughs, chokes, or just makes a sound. The result – the darkest eye bags one has ever seen! But I do not care. And no, I will leave her bed in our room until she is….30 years old! Ha!

Greg always sings for her when she cries… George Ezra’s song “Shotgun”, that just calms her down every time. My voice on the other hand…um.. yes, let’s just say that I wasn’t blessed with the talent of singing.  So… now that he’s gone, who’s gonna sing to her? I was prepared for everything, packed everything and even more, but I didn’t think of that! But apparently he did.

When I woke up one morning, I had a WhatsApp from him. A video. He had filmed himself singing “Shotgun” by George Ezra – FOR AMÉLIE! Da, for whom else!? But the most beautiful thing was that he was standing in the middle of people in a pub in Galway, Ireland, and just sang loudly into his camera. He didn’t care if anyone looked at him stupid. Dada stood there, in a pub, at a bachelor party at 2AM and sang for his daughter THE song that always calmed her down, crowned by an “I love you my babies”. 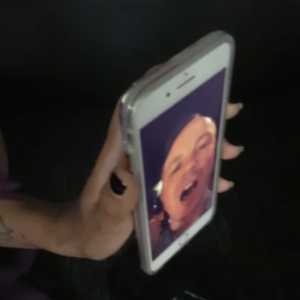 I was so incredibly touched that I cried and could hardly calm down. It was Happy-Tears…but still. In that moment I had missed him more than ever. Sound like a scene from a movie, right? So… I had tears in my eyes and Amélie…she started to grin. No joke! She was totally fixated on the mobile screen and was totally tied up. She fully understood what was going on and who was on the screen. I swear! She is so advanced, crazy! She looked at the whole thing with a smile and at the end she looked at me, grinned again….and (I think this is where I new episode of „Look Who’s Talking“ would be a good idea) stopped crying. Obviously! It was in any case once again such a highlight, a memory, an experience more that melted my heart and I simply thought again: “Hach…you are truly amazing, Amélie…”.

Could just burst with love…!

No images found!
Try some other hashtag or username

This website uses cookies to improve your experience. We'll assume you're ok with this, but you can opt-out if you wish. Accept Read More